Follow Wolf Woman of the Northern Woods on WordPress.com

How did you become involved in supporting the abolition of prostitution?

I first started campaigning for abolition of prostitution after the murders of several prostitutes in Ipswich. That was very triggering for me, but at the time, I was unclear why. I was very angry, incessant with rage, for it seemed that the media is, and was, only interested in the murders of the prostituted when it is in connection with the sensation of a serial killer. When I started my blog, it was with unclear memories and feelings, and of knowing that most murdered prostituted women and girls are never recorded – they just vanish from existence. It is to those disappeared that my motivation to fight for abolition is founded on. I am sick of the vast majority of the prostituted being made into sub-human in life, and in death, being made to vanish.

A Trick Of The Trade

“The Nordic model? It won’t work. You can’t decriminalize women and girls but criminalize the men who buy sexual access to them. It drives prostitution underground and puts them at risk of violence. Decriminalize ALL aspects of the sex trade to protect women and girls against violence and exploitation.”

Human rights group Amnesty International is currently risking everything it stands for to endorse The Argument. But if The Argument is true, why do violent and exploitative men want decriminalization?

‘LikeRedHeads’ is the name used by a man on the Toronto Escort Review Boards (TERB). He has written over 1000 posts on the site, including reviews of the women he pays for.

He is John No.9 in The Invisible Men Project (Canada). [Read the full review here] 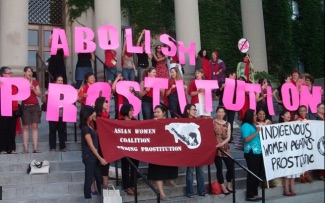 Who is alvah lyall?
Healing From Complex Trauma & PTSD/CPTSD

A journey to healing from complex trauma.

Feminist critiques of the sex(ism) industry.

A socialist critique of gender ideology

the Art of Dissent

the Art of Dissent

Translating the words of survivors of prostitution

They Say This Never Happens...

...but somehow it does with regularity

thegynocrat
The Politics of Gender

Documenting news and events related to the politics of gender

A survivor of prostitution fighting against the legalised lies of the sex industry.

My Only Path to Power - Diary of a Trans Widow

visit my new site at http://thetranswidow.com

Memoirs of a Butch Lesbian

Gender Is War
Not The News in Briefs

A blog by Helen Saxby

Wary, Contrary and no Virgin Mary

because blogging is the cheapest form of therapy

a rain and a gale

Feminism, mental health and stickin' it to the man

Your social constructs are showing

There Are So Many Things Wrong With This

if you don't like the news, make some of your own

Your fantasy is my nightmare